The Drug Discovery, Drug Design, and Drug Development is a time consuming as well as expensive and financially risky but rewarding process. The word “Drug” derived from Greek “Pharmacon” meaning “Drug” and the French word “Drogue” meaning “Dry Herb”. A drug is any chemical substance which when acts on the living body alter the physiological process and are used for prevention, diagnosis, control, and treatment of disease. Difference between Drug and Medicine (Drug Product). Generally, a drug is available in the market by passing through 3 stages:

However, the difference between drug design and drug development is discussed step by step.

Drug design is an inventive effort of designing a suitable lead molecule to make it more active and safer with less toxicity than the original lead molecule that may properly bind with its specific receptor sites to produce a certain pharmacological effect.

Simply, Drug design means lead modification, lead is a chemical with potential therapeutic benefit(s). Once the lead compound has been invented it can be used as the starting point for drug design.

Drug design is the inventive process of finding new medications based on the knowledge of a biological target. [1]

Drug development is the process of establishing and marketing a safe, stable, and effective new pharmaceutical drug product through preclinical, clinical testing and regulatory approval, from a biologically active lead compound that has been available via the process of drug discovery and drug design.

In other words, Drug development is the physicochemical and pharmaceutical modification of new or existing active compound to make the compound with increased stability, activity, selectivity, reduced side effects, easy and efficient administration to the patient. Drug development includes preclinical, clinical testing, and regulatory approval with a new drug application to market the drug.

Simply, Drug development is the process of establishing and marketing a biologically active compound obtained by drug design.

There are two key types of drug design [2]: 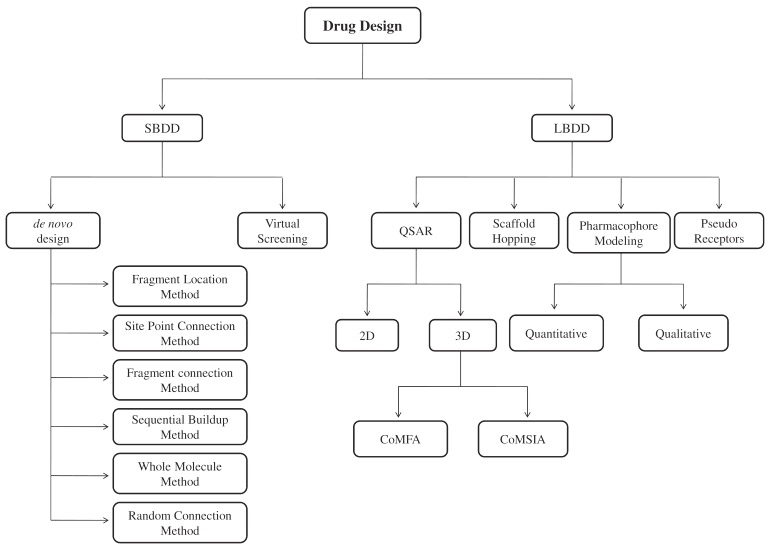 On the other hand, drug development has no classification.

Drug design aims to improve the pharmacodynamic properties and pharmacokinetic properties of a drug. There are various aims in drug design:

On the other hand, the aims of drug development are:

The drug is designed by following one or more method:

Whereas, the development process is divided into two sections [3]:

Attempt to Drug design is taken by either governmental research organization or private research organization or university research laboratory or pharmaceutical companies. While Attempt to drug development is mostly taken directly or indirectly by pharmaceutical companies (such as Merck & Co., Inc., Pfizer, Roche) once a biologically active compound that has been available via the process of drug discovery and drug design.

Example of drug development: establishing and marketing a safe, stable, and effective new Fluconazole tablet from Fluconazole after preclinical and clinical testing and regulatory authority approval.

In short, the difference between drug design and drug development

No classification Aims To improve pharmacodynamic properties and pharmacokinetic properties of drug. Establishing and marketing a safe, stable, and effective new pharmaceutical drug product. Method Designed by following one or more method:

8. Simplification of the structure,

9. Rigidification of the structure.

12. Prodrug synthesis The development process is divided into two sections: Difference between Bioavailability and Bioequivalence Difference between Hospital and Clinic