Difference between Cream and Ointment

Cream and ointment of the same API are available, now which one is better?

1. Definition of Cream and Ointment

On the other hand, Ointments are semisolid dosage forms that comprise less than 20% water & volatiles, and more than 50% hydrocarbons, waxes, or polyols as the vehicle, intended for external application.

Generally, creams are white to off-white color but may have different colors such as yellow (Nystatin Cream USP). While ointments are usually translucent but may have various colors like light yellow, yellow (Cipladine ointment) and black (Ichthammol ointment) etc. 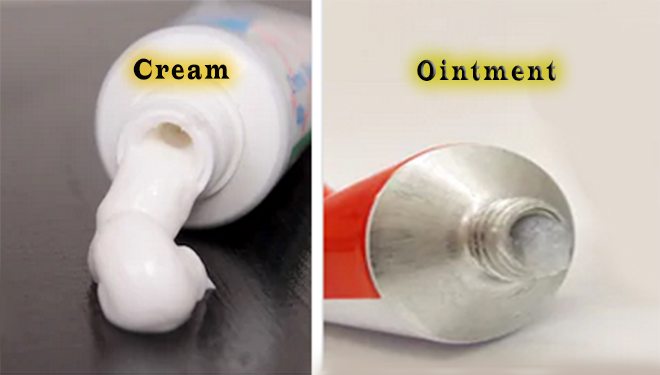 The cream contains more than 20% water and volatiles and normally less than 50% hydrocarbons, waxes, or polyols as the vehicle for the drug substance [1].

On the other hand, ointment contains less than 20% water and volatiles, and more than 50% hydrocarbons, waxes, or polyols as the vehicle [1].

Generally, Creams are thin. While ointments are thick.

Pharmaceutical cream may be easily spreadable than the ointment. When a large surface area of the body needs to apply medication, creams are better as they are easy to spread.

On the other hand, Pharmaceutical ointments may be less spreadable on the skin than cream and make an occlusive layer on the skin. Also, the spreading of ointments on moist skin surfaces may be tough due to the hydrophobic nature of most ointments.

Generally, Creams are non-greasy or less greasy than ointment. While ointments are greasy than cream.

If an Active Pharmaceutical Ingredient (API) is prone to hydrolysis which may lead to degradation of that drug in cream and hence cream have shortened shelf-life. On the other hand, by using a hydrophobic ointment base this problem may be avoided in the ointment. Also, the ointment has less than 20% water. An ointment has a longer shelf-life usually. For example, Hydrocortisone is formulated as both ointment and cream. But shelf-life of Hydrocortisone ointment is greater than in an oil in water cream.

There is no chance of staining cloth by using creams. Whereas Ointments can leave stains on clothing.

14. Example of cream vs ointment

Summary of the difference between Cream and Ointment