Pharmacopoeia means ″drug-making″ or ″to make a drug″. This word derives from the ancient Greek (pharmakopoiia), from (pharmako) ″drug″, followed by the verb-stem (poi) ″make″ and finally the abstract noun ending (-ia).

Pharmacopoeia is an official publication describing drugs, chemicals, and medicinal preparations as well as containing directions of compound identification. The word ‘Pharmacopoeia’ is widely used and common spelling but ‘Pharmacopeia’ used only in USP.

Remember that, a detailed written study of a single specialized subject is called monograph. A monograph contains but not limited to the name of the ingredient, the definition, preparation, storage, packaging, and labeling requirements; and the specifications. The specification contains a series of tests, procedures for the tests, and acceptance criteria. A list of pharmacopoeia are given below: 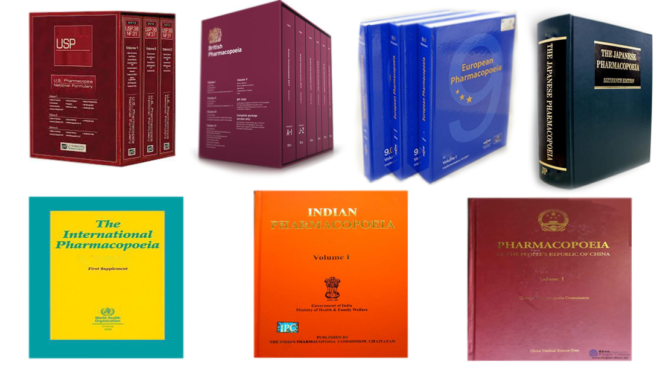 Its INN system symbol is USP. The USP is issued in a combined with the National Formulary as the USP-NF. The USP is an official compendium for drugs marketed in the U.S. and annually published by the United States Pharmacopeial Convention. To avoid probable charges of adulteration and misbranding, a drug product in the U.S.A market must conform to the standards in USP–NF.

On 15th December 1820, the first edition of United States Pharmacopeia was published in both English and Latin. It was published annually since 2002. First National Formulary of the U.S. appeared in 1888. In 1992, the electronic version of USP-NF on floppy disks was introduced. USP has laboratories in India, Brazil, China, and the United States.

Its INN system symbol is BP. Since 1864, BP has been supplying official standards for medicines. It was consist of two sections.

In 1953, the eighth edition of BP was published. In this edition titles of drugs and preparations were in English in lieu of Latin and metric system. Annually BP has been published. In BP 2007 monographs has been presented for material specifically used in the preparation of Traditional Chinese medicines.

Its INN system symbol is Ph. Eur. It is Europe’s legal and scientific benchmark for pharmacopoeial standards. It helps to deliver high-quality medicines in Europe and beyond. It is a published collection of monographs that describe active and inactive ingredients, methods of analysis for medicines, descriptions of reagents, animal, human or herbal origin, homoeopathic stocks and homoeopathic preparations, antibiotics, vaccines as well as dosage forms and containers. It also contains texts on biologicals, blood and plasma derivatives, and radiopharmaceutical preparations. In 1969, the first edition of the Ph. Eur. was published which consisted of 120 texts.

Its INN system symbol is JP. The JP (日本薬局方) is the official pharmacopoeia of Japan. Pharmaceuticals and Medical Devices Agency under the authority of the Ministry of Health, Labour and Welfare have been published JP. The first edition was published on 25 June 1886, with revisions being issued from time to time. The current revision is number 17, issued electronically in English language on 7 March 2016. On 25 June 1886, JP was first published and implemented in July 1887 and issued electronically in English language on 7 March 2016 and JP has been revised periodically.

Its INN system symbol is JP. The IP is the official pharmacopoeia of India. Indian Pharmacopoeia Commission (IPC) has been published IP under the authority of the Ministry of Health & Family Welfare, Government of India. For manufacturing, selling medicine in India market IPC sets standards.

Its INN system symbol is ChP. The Pharmacopoeia Commission under the authority of the Ministry of Health of the People’s Republic of China has been published the Pharmacopoeia of the People’s Republic of China (PPRC) or ChP. ChP is an official compendium of drugs which covering traditional Chinese and western medicines, which includes information but not limited to description, the standards of purity, test, precaution, storage, strength and dosage for each drug. Also, it is recognized as the official Chinese pharmacopoeia by the WHO.