Difference between Potency and Efficacy

1. Definition of Potency and Efficacy 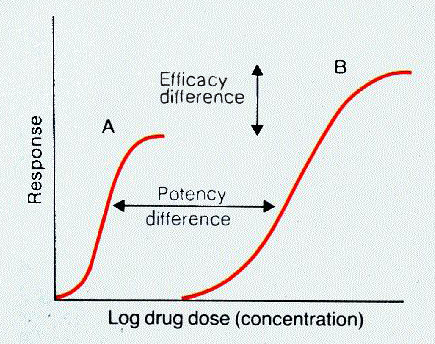 In other words, Potency refers to the concentration (EC50) or dose (ED50) of a drug required to produce 50% of that drug’s maximal effect [2].

Potency is a measure of the amount of drug necessary to produce an effect of a given magnitude [3].

On the other hand, Efficacy is the ability of a drug after binding with receptors to initiate change which leads to certain effects. Simply, Efficacy (Emax) is the capacity of a drug to produce a maximum response. Also, it is known as maximal efficacy.

In other words, Efficacy is the maximal response that can be elicited by the drug [1].

In other words, Efficacy is the ability of a drug to elicit a physiologic response when it interacts with a receptor[3].

2. The core theme of potency and efficacy

Potency is absolute potency. Whereas, efficacy is therapeutic potency.

3. Estimation of potency and efficacy

Potency of a drug depends on the affinity of the receptors to bind the drug and how effectively the drug-receptor interaction leads to clinical response [4]. Whereas, efficacy depends on the concentration at the site of action, the number of drug-receptor binding, psychological factors and, the efficiency of the coupling of receptor activation to cellular responses.

9. Example of potency and efficacy

Summary of the difference between Potency and Efficacy

1st. Difference between pharmacokinetics and pharmacodynamics

2nd. Difference between poison and toxin

4th. Difference between Signs and Symptoms Difference between Calibration and Validation Difference between Lubricant and Glidant The Drug Discovery, Drug Design, and Drug Development is a time consuming as well as …