Generic name of drugs vs Brand name of Drugs

What is the generic name of drugs?

Generic name is a unique, nonproprietary name of drug adopted by an officially recognized organization within each country. For example, within the United States of America, generic names of drugs adopted by the United States Adopted Names (USAN) Council which is co-sponsored by the United States Pharmacopeial Convention, American Medical Association, and the American Pharmacists Association). The generic name is usually used to identify a unique API (Active Pharmaceutical Ingredient). In most of the country, the generic name of a drug is the same but few have a different name. For example Paracetamol (According to British Approved Name (BAN) and Acetaminophen (According to United States Adopted Names (USAN) Council), Glyburide (USAN) and Glibenclamide (BAN).

What is the brand name of drugs?

A brand name is a unique, proprietary name of which is given by the pharmaceutical company and approved by officially recognized organizations (such as USFDA) within each country. This name is adopted to trade in a market. 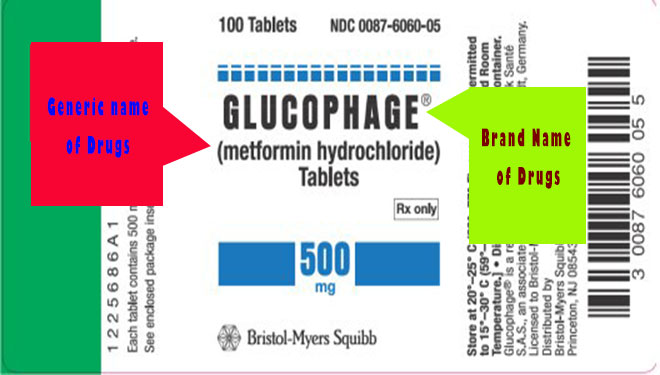 List of Generic name of drugs and Brand Name of Drugs:

The term “generic drug” or “generic medicine” both have used as the same meaning to understand a pharmaceutical product although there are some differences between drug and medicine.

Generic medicines / Generic Drugs are an off-patent pharmaceutical product that is bioequivalent to its Innovator product, manufactured by a pharmaceutical company in the same dosage form, strength, route of administration, safety, quality, and performance characteristics after expiring the innovator drug patent.

According to the World Health Organization (WHO), “generic drug” or “generic medicine” is a pharmaceutical product which is:

–interchangeable with an innovator product,

–manufactured without a license from the innovator company, and

–marketed after the patent or other exclusive rights expiration [1].

According to USFDA (United States Food and Drug Administration) defines a generic as:

What is brand name drugs/medicine?

Brand name drugs/medicine is the name of a drug product whose acceptable formula is developed by a pharmaceutical company and marketed under a patent or registered trademark. Frequently, drugs can be formulated in several ways such as buffered versus non-buffered aspirin, resulting in multiple brand names for the same drug (Active Pharmaceutical Ingredient). Brand name /medicine also known as innovator drugs.

Bonus information for you:

What is the Chemical name of drugs?

What is the Trivial name of drugs?

Trivial name is a non-systematic, non-formal, common name of drugs, sometimes arising from historical uses. For example, the trivial name of Aspirin is acetylsalicylic acid or ASA). Enzyme, Coenzyme, Apoenzyme, Holoenzyme, and Cofactor are most often confusing. If you want to know …